On Saturday the Lackawanna Heritage Valley organization sponsored their annual "Heritage Explorer Train" to Carbondale for the town's Pioneer Days Festival. Motive power for the train's five coach consist was DL 2457 (C425 ALCO). The train was scheduled to depart from Scranton at 10 AM. The first image was taken in Olyphant around 11 AM as it passed over the South Valley Avenue grade crossing. With the train's passing I hurried off to my next photo location which was Archbald. Upon my arrival I noticed what looked like a person laying in the track's gauge. Walking over to this person I nudged him with my foot and got no reaction. Again I nudged him and this time he woke up in a dazed state. I told him a train was coming and his reply was "I want to sleep!" Being persistent I kept telling him he had to move and eventually he did. The way he staggered about after leaving the ROW I had to wonder if it was drugs or a hangover that put him in that condition. It was sad to see this young man, perhaps in his mid-twenties, in that state and cast a somber note to this day of my being trackside. On the other hand being there and getting him off of the tracks avoided a potential tragedy. 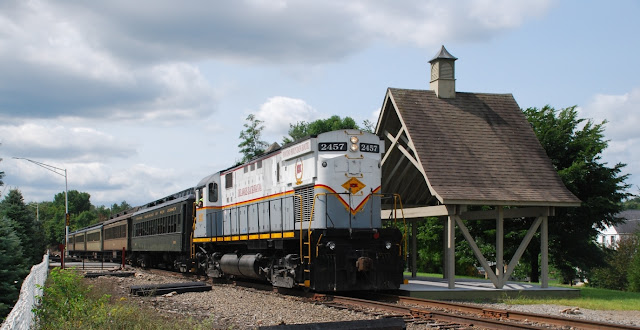 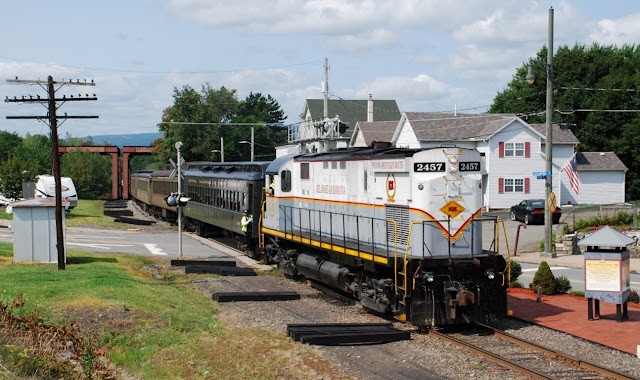 Posted by The Big Little Railroad Shop at 8:21 AM
Email ThisBlogThis!Share to TwitterShare to FacebookShare to Pinterest

Not a bad morning in Manville


As I was hoping to photograph the NS's CNJ heritage unit leading intermodal 20E on this sun filled morning. First train through was what I thought was NS's 212 having NS 7670, NS 8095 and NS 7680 as its power consist and passing by around 8:11 AM. It would be about another hour before the CNJ's headlight appeared in the distance. Leading was NS 1071 followed by NS 2503 and NS 1010. Unfortunately for me some clouds partially obscured the sun as the train passed by and effectively reduced illuminating the scene. Of the two images one has to admit that the image of 212 is a much more pleasing photo due to more sunshine than the 20E, wouldn't you agree? 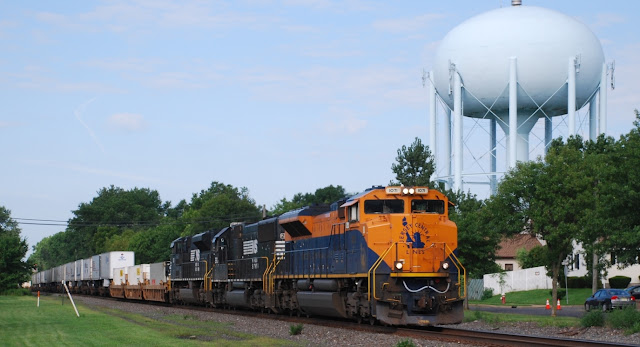 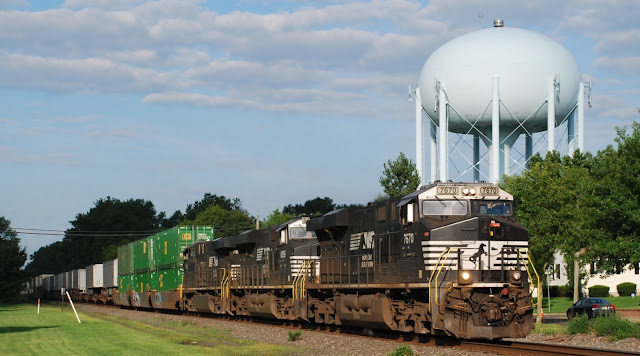 Posted by The Big Little Railroad Shop at 3:22 PM
Email ThisBlogThis!Share to TwitterShare to FacebookShare to Pinterest

NORFOLK, Va., Aug. 17, 2017 -- As skygazers prepare for the first total solar eclipse in the continental U.S. since 1979, Norfolk Southern (NYSE:NSC) is encouraging viewers to stay away from  railroad tracks.

Norfolk Southern trains run around the clock in all weather and lighting conditions and will continue to operate during the Aug. 21 eclipse. The full solar eclipse will be visible from seven states across  Norfolk Southern’s 22-state network, while a partial eclipse will be seen across the railroad’s entire system. The full eclipse will last two minutes and 30 seconds. In that time, a freight train traveling 50 mph can cover 2.1 miles and take more than a mile to come to a complete stop.

Walking on or close to railroad tracks is dangerous and illegal. Many rail cars extend up to six feet beyond the rails.

“We want you to remain safe while viewing this historic event. If you are near railroad tracks and distracted by the eclipse, you are putting yourself in serious jeopardy,” said Chip Feininger, Norfolk Southern’s system safety coordinator.

Those seeking optimal views of the eclipse should not walk on or beside railroad tracks or climb railroad trestles. Cross tracks only at designated rail crossings. In addition, motorists should not attempt to view the eclipse while driving or stopping their car near the tracks for a better view.

According to the Federal Railroad Administration, 977 people nationwide in 2016 were injured or lost their lives after being struck by a train while trespassing on or near railroad tracks.

http://www.norfolksouthern.com
Posted by The Big Little Railroad Shop at 3:14 PM
Email ThisBlogThis!Share to TwitterShare to FacebookShare to Pinterest

Posted by The Big Little Railroad Shop at 3:13 PM
Email ThisBlogThis!Share to TwitterShare to FacebookShare to Pinterest

Earhart, a certified public accountant, joined NS in 1985 and most recently served as executive vice president and chief information officer. In connection with her appointment as CFO, Earhart will retain her information technology responsibilities.

“After an extensive review of internal and external candidates, the Board is pleased to announce Cindy’s appointment as CFO,” said James A. Squires, NS chairman, president and CEO. “Cindy has a strong financial background, a comprehensive understanding of NS’ operations, and a proven track record as a senior executive who challenges thinking and encourages innovation. As we continue to leverage technology enhancements to drive further improvements in customer service and productivity, we are confident that having Cindy in this key position will accelerate our progress. We welcome Cindy to her new role and look forward to benefiting from her expertise as we build on our success in reducing costs, driving profitability, and accelerating growth.”

About Cynthia C. Earhart
Since joining NS’ accounting department in 1985, Earhart held positions of increasing responsibility in the accounting department, including assistant vice president, before transitioning to information technology. She was named vice president, information technology in 2001. In 2007, Earhart was named vice president human resources, and in 2013, she was appointed executive vice president administration. She assumed expanded responsibilities as executive vice president, administration and chief information officer in 2015. Earhart, a certified public accountant, began her career at NS following her service as an accountant at Ernst & Young’s predecessor CPA firm Ernst and Whinney. She earned her Bachelor of Science degree in accounting from the University of Missouri and has completed the Advanced Management Program at Harvard Business School.

http://www.norfolksouthern.com
Posted by The Big Little Railroad Shop at 3:10 PM
Email ThisBlogThis!Share to TwitterShare to FacebookShare to Pinterest

Summer is almost over; enjoy one of our August events at BR&W Railroad!

Posted by The Big Little Railroad Shop at 12:53 PM
Email ThisBlogThis!Share to TwitterShare to FacebookShare to Pinterest

NORFOLK, Va., July 31, 2017 — Norfolk Southern Corporation (the "Company") announced today the commencement of offers to certain eligible holders (together, the "Exchange Offers") of the Company's outstanding debt securities listed in the table below (together, the "Existing Notes") to exchange Existing Notes for consideration consisting of cash and up to $600,000,000 aggregate principal amount of the Company's new Notes due 2052 (the "New Notes"), the complete terms of which are set forth in an offering memorandum, dated today (the "Offering Memorandum"), and the related letter of transmittal, dated today (together with the Offering Memorandum, the "Offering Documents").

The table below indicates each series of Existing Notes included in the Exchange Offers:

The following is a summary of certain key elements of the planned Exchange Offers:

If and when issued, the New Notes will not have been registered under the Securities Act of 1933, as amended (the "Securities Act"), or any state securities laws. The New Notes may not be offered or sold in the United States or to any U.S. persons except pursuant to an exemption from, or in a transaction not subject to, the registration requirements of the Securities Act and applicable state securities laws. The Company will enter into a registration rights agreement with respect to the New Notes. The New Notes will be unsecured obligations of the Company and will rank pari passu with all other unsecured and unsubordinated indebtedness of the Company.

The Exchange Offers are only made, and copies of the documents relating to the Exchange Offers will only be made available, to a holder of Existing Notes who has certified in an eligibility letter certain matters to the Company, including its status as a "qualified institutional buyer" as defined in Rule 144A under the Securities Act or who is a person other than a "U.S. person" as defined in Rule 902 under the Securities Act. Holders of Existing Notes who desire access to the electronic eligibility form should contact D.F. King & Co., Inc., the information agent for the Exchange Offers, at 800-431-9645 (U.S. toll-free), 212-269-5550 (collect), or at nsc@dfking.com. Holders that wish to receive the Offering Documents can certify eligibility at www.dfking.com/norfolksouthern.

This news release does not constitute an offer or an invitation by the Company to participate in the Exchange Offers in any jurisdiction in which it is unlawful to make such an offer or solicitation in such jurisdiction.