Received the following via email. It isn't about trains or model railroading, but we thought it important enough to post. Please feel free to copy it into your own email and pass it along.

Please join us in this FLY THE FLAG campaign and PLEASE forward this email immediately to everyone in your address book asking them to also forward it. We have a little less than two weeks and counting to get the word out all across this great land and into every community in the United States of America. If you forward this email to least 11 people and each of those people do the same...you get the idea.

THE PROGRAM IS THIS:

On Tuesday, September 11th, 2007, an American flag should be displayed outside every home, apartment, office, and store in the United States. Every individual should make it their duty to display an American flag on this anniversary of our country's worst tragedy. We do this in honor of those who lost their lives on 9/11, their families, friends and loved ones who continue to endure the pain, and those who today are fighting at home and abroad to preserve our cherished freedoms.

In the days, weeks and months following 9/11, our country was bathed in American flags as citizens mourned the incredible losses and stood shoulder-to-shoulder against terrorism. Sadly, those flags have all but disappeared. Our patriotism pulled us through some tough times and it shouldn't take another attack to galvanize us in solidarity. Our American flag is the fabric of our country and together we can prevail over terrorism of all kinds.

(1) Forward this email to everyone you know (at least 11 people). Please don't be the one to break this chain. Take a moment to think back to how you felt on 9/11 and let those sentiments guide you.

Honestly, Americans should fly the flag year-round, but if you don't, then at least make it a priority on this day.

Thank you for your participation.
God Bless You and God Bless America

Posted by The Big Little Railroad Shop at 9:43 AM
Email ThisBlogThis!Share to TwitterShare to FacebookShare to Pinterest

on a recent trip to Orlando, Florida's Disney World, I didn't forget to pack my railfanning interest in the suitcase for this trip. One of the most interesting aspects to moving people around the park's Epcot and Magic Kingdom resorts in a efficent manner would be Disney's monorail system. This 13.6 mile monorail system will carry over 150,000 guests to the Magic Kingdom and Epcot parks on an average day. At Epcot's World Showcase German pavilion, there is also a well designed and attractive garden layout that can be seen.

The current model of monorail began operation in 1990, with the full fleet of 12 in service by early 1991. The Mark VI has a higher passenger capacity as well as improved air conditioning, door systems and improved safety features. Each Mark VI train consists of six cars. The overall length is 203 feet with a capacity of 365 passengers. A quick glance at some of the cars initially lead this causal observer to believe that some cars were vandalized with grafitti! I later saw that these are Disney-themed designs on these cars.

The track consists of 26 inch wide, pre-cast concrete beams supported by concrete columns which are approximately 50 feet apart. Each monorail travels on rubber tires and is powered by a 600 volt DC propulsion system which includes eight DC motors rated at 112 HP each, with the power emanating from each side of the beam. The track's construction gives passengers a very smooth ride that also makes them feel as if they are gliding in air along the elevated track 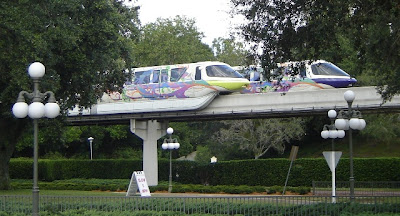 Posted by The Big Little Railroad Shop at 9:32 AM
Email ThisBlogThis!Share to TwitterShare to FacebookShare to Pinterest

Following article is from the Cincinnati Enquirer for Monday, 8/20/07.

ELMWOOD PLACE -- A man walking across the Township Avenue railroad crossing was struck and thrown 50 feet by a Norfolk Southern train this morning.

A witness, Mike Billups, of Deer Park said the man was text-messaging on his cell phone at the crossing just before the accident, which occurred about 10 a.m.

Billups said the man waited for a southbound CSX train to pass. After it cleared the crossing, the man walked forward and was struck by a northbound train.

The man may have been distracted and unaware that a second train was coming in the other direction, Billups said.

Col. William Peskin of the Elmwood Place Police Department said he also had heard that the man was text-messaging and possibly distracted. The crossing is maintained by Norfolk Southern and had all gates and lights in working order.

The unidentified man, who is in his 20s, was taken to University Hospital by St. Bernard rescue. Elmwood Place Mayor Richard Ellison, who went to the scene, said the man appeared “a little roughed up” with a nose bleed, bump on the head and some scratches but appears as if he will be OK.

Ellison received a call about the man being hit by a train and immediately went to the area.

“There were five witnesses. I talked to three of them myself,” Ellison said.

The witnesses told the mayor they saw the man wait in front of the double gate for a southbound train to pass before crossing the tracks while text messaging on his cell phone. That’s when he was hit by the northbound train.

“The horn was blowing like mad and the kid was text messaging,” Ellison said. “The kid apparently was just daydreaming.

Added Ellison: “The only way the train could have missed him was if it could make a turn.”

The railroad crossing has had “practically no” incidents in the past, Ellison said.


Additional information from the Associated Press.

Zachariah Smith, 18, waited around 10 a.m. for a southbound train operated by Jacksonville, Fla.-based CSX Corp. to pass. He then walked around a gate and onto the tracks, apparently unaware that a Norfolk Southern Corp. train was coming from the other direction, said witness Mike Billups.

"The horn was blowing like mad and the kid was text messaging," said Mayor Richard Ellison, who went to the scene and talked to several witnesses after hearing of the accident. "The kid apparently was just daydreaming."

Smith was knocked out by the collision, Billups said.

After regaining consciousness, Smith was taken by paramedics to nearby University Hospital in Cincinnati with undisclosed injuries. He was listed in serious condition Monday night.

It was not clear how fast the train was traveling.

Gates and lights at the crossing, which is maintained by Norfolk, Va.-based Norfolk Southern, were in working order, said Elmwood Place police Col. William Peskin.
Posted by The Big Little Railroad Shop at 12:30 AM
Email ThisBlogThis!Share to TwitterShare to FacebookShare to Pinterest

were certainly sparse along the Lehigh Line near Manville (NJ) on this Saturday morning. Four trains, three NS and one CSX, was all that was seen during my time track side. Those trains were:

MA-1 @ 9:16- headed east out of Manville yard with thirteen coil cars behind PRR 3048 (GP40-2, ex-CR 3364) and CSX 6109. PRR 3048 certainly looked like it had seen better days of service! Another interesting sight was the appearance of a CR CoilShield car mixed in amongst the CSX Coil cars. 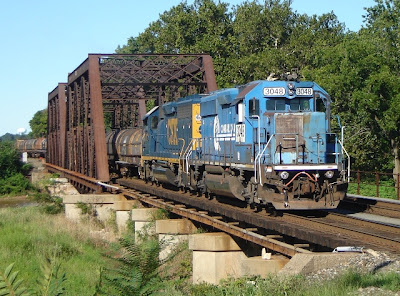 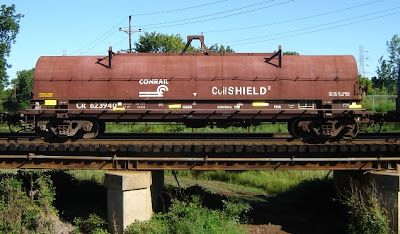 Falling into the "heard about but not seen" category was NS I4V and an NS westbound power move.

Posted by The Big Little Railroad Shop at 1:26 AM
Email ThisBlogThis!Share to TwitterShare to FacebookShare to Pinterest 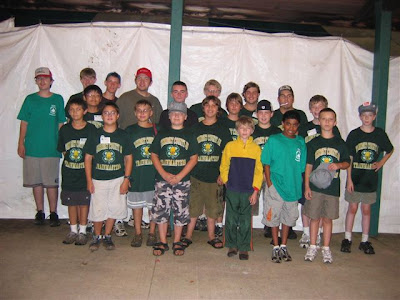 Posted by The Big Little Railroad Shop at 12:42 AM
Email ThisBlogThis!Share to TwitterShare to FacebookShare to Pinterest

The Somerset 4-H Trainmasters Model Railroad Club is once again at the Somerset County 4-H Fair. The Fair runs from Wednesday, 8/15 through Friday 8/17, 2007, and it is located in North Branch Park on Milltown Road in Bridgewater. The club currently has 23 members ranging in age from 10 to 16. Their display is located in the pavalion at the rear of all the tents, between the cows and goats. Come see the great modeling work of the members and watch the trains run. If you are interested in joining, or you know someone who might be interested, please ask the folks at the display. You can also visit the club web site at: http://home1.gte.net/vzeo5q9u/
Posted by The Big Little Railroad Shop at 12:04 AM
Email ThisBlogThis!Share to TwitterShare to FacebookShare to Pinterest

Before going to cut the grass...

decided that this would be a good morning to spend some time trackside in Manville, NJ. After the previous week's roller coaster ride of varying weather conditions, it was time for me to take advantage Saturday's enjoyable weather. As for the trains that passed by my vantage point, they were: 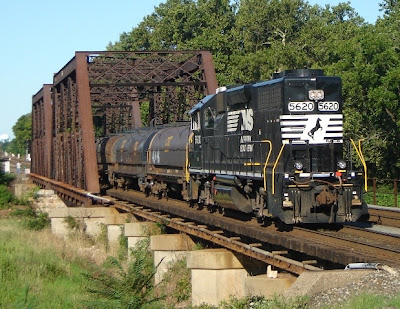 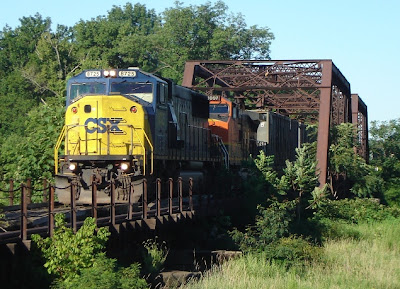 Hope that your morning was just as enjoyable!

Posted by The Big Little Railroad Shop at 8:35 AM
Email ThisBlogThis!Share to TwitterShare to FacebookShare to Pinterest

Pictures below are of the recently repainted Erie E8A on the turntable at Port Jervis, NY taken on 7-29-07. (See also posting below about this locomotive.) The E8A belongs to Jimmy Wilson, New York and Greenwood Lake RR. It was repainted at Ringoes, NJ and towed to Port Jervis by NS. New York and Greenwood Lake RR plan to put up an enclosure at the turntable area in Port Jervis which would encompass the E8A, the Alco(?), the GP9m(?) and two pieces of Private Varnish that have been refurbished and become a tourist attraction. They also plan to do passenger car restoration at this location. 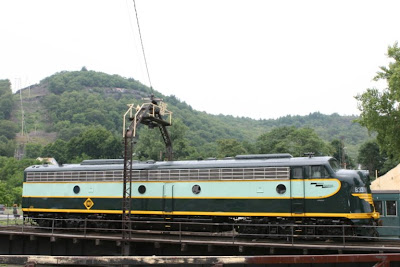 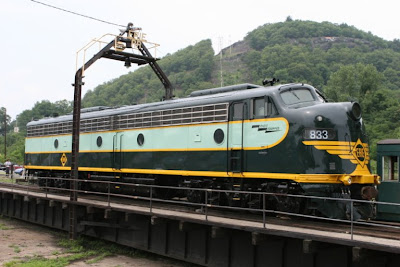 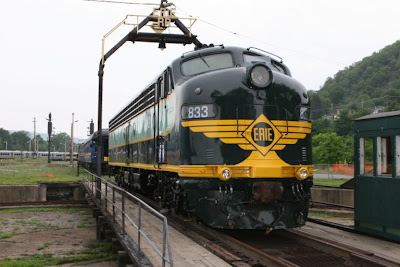 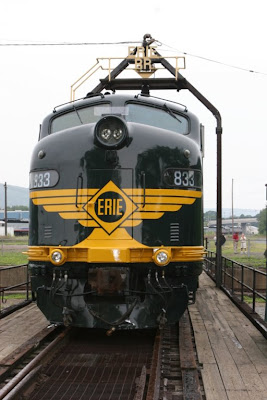