Posted by The Big Little Railroad Shop at 6:44 PM
Email ThisBlogThis!Share to TwitterShare to FacebookShare to Pinterest

This will be the last mass photo email sent out as Earthlink has decided  to
limit messages to a maximum of 80 recipients.  Most everything will be
posted on Facebook.  If you have that application, look me up and friend me
there.  If you don't have it, let me know and I will try to send it to you
directly. 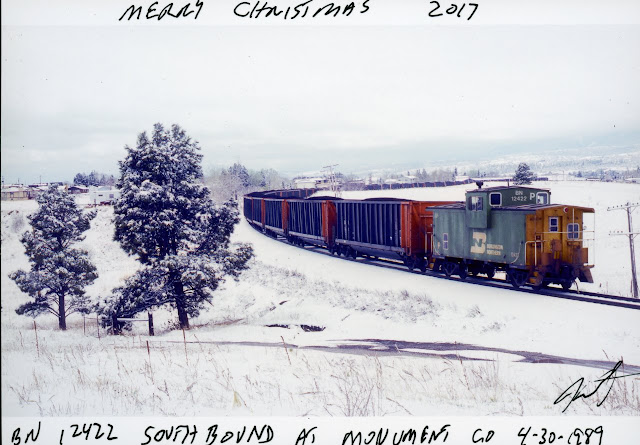 Posted by The Big Little Railroad Shop at 6:42 PM
Email ThisBlogThis!Share to TwitterShare to FacebookShare to Pinterest

A holiday toast for one and all this holiday season!


When Air Products transported their heat exchangers down the Lehigh Line here in NJ, one observation was how it looked like a giant bottle. Perhaps this photo is wishful thinking but the sentiments shown in that scene is a toast to all my friends and their families for good health and happiness during this holiday season and into the new year!

Posted by The Big Little Railroad Shop at 4:07 PM
Email ThisBlogThis!Share to TwitterShare to FacebookShare to Pinterest


Posted by The Big Little Railroad Shop at 3:27 PM
Email ThisBlogThis!Share to TwitterShare to FacebookShare to Pinterest

CASTILE, N.Y., Dec. 11, 2017 – After two years of construction across a 235-foot-deep river gorge in Letchworth State Park, Norfolk Southern has begun operating trains across the new Portageville Bridge on its Southern Tier Line.

The $75-million single-track bridge, which spans the Genesee River Gorge, was funded through a public-private partnership among Norfolk Southern, the New York State Department of Transportation, and the Federal Highway Administration.

At 2:20 p.m. Monday, Norfolk Southern’s 36T, an eastbound general merchandise train running from Buffalo to Allentown, Pa., with stops in Corning and Binghamton, N.Y., became the first to run across the new bridge.

“This is a very exciting day for Norfolk Southern and for the future of freight rail service in New York’s Southern Tier region,” said James A. Squires, chairman, president and CEO. “The successful completion of this bridge is an excellent demonstration of how the public and private sectors can work together on freight transportation projects that generate significant public benefits and are vital to U.S. commerce. It’s also a testament to Norfolk Southern’s robust bridge program and the ingenuity of engineers and railroaders.”

“The new Portageville Bridge complements the beauty of Letchworth State Park while providing safer, more efficient freight rail service,” said New York Gov. Andrew M. Cuomo. “Through a combined effort with Norfolk Southern, government leaders and the public, we have built a modern arch bridge which will support economic growth in the region and continue our drive to strengthen and modernize transportation infrastructure across the state for generations to come.”
In addition to enhancing rail safety and operating efficiencies, the new bridge expands freight capacity and business opportunities for shippers from the Midwest to New England. With the new bridge, Norfolk Southern can now transport rail cars over the Southern Tier Line loaded to the industry standard 286,000 pounds, a key benefit for customers. The old iron truss bridge it replaces, built in 1875 by the Erie Railroad, was unable to support modern freight rail needs – car weights had to be reduced 13,000 pounds below the standard, while train speed was restricted to 10 mph. Trains crossing the new bridge will operate at up to 30 mph.

“I’m immensely pleased with the revitalization of the Portageville Bridge,” said New York State Assemblyman David DiPietro. “Investing in infrastructure and supporting businesses that create it is central to a strong economy. The jobs created by these ventures and the efforts surrounding the Portageville Bridge are vital to our local economy. Creating opportunities to expand both business markets and infrastructure is something we must always stress, and this is the perfect union to achieve that.”

Among New York-based businesses benefitting from the new bridge are 10 short line railroads that service and connect local industries to Norfolk Southern’s network. Norfolk Southern transports freight over the Southern Tier Line for about 1,100 customers in more than 20 states. The line serves as a gateway for trade with Canada and provides a connection to New York City and New England markets.

“This new, state-of-the art bridge over the Genesee River Gorge is an engineering marvel and will enhance train traffic across the region,” said New York State Sen. Patrick M. Gallivan. “It also complements the beauty of Letchworth State Park and helps to restore the river to its natural state for the first time in nearly 150 years. This public-private sector project, funded by New York State, the Federal Highway Administration, and Norfolk Southern, will serve our community for decades.”

The design and construction budget for the bridge project included $15.5 million provided through New York State, including a $2 million grant from the Finger Lakes Regional Economic Development Council and $13.5 million in state and federal funds through the New York State Department of Transportation; and $59.5 million from Norfolk Southern.

http://www.norfolksouthern.com
Posted by The Big Little Railroad Shop at 3:26 PM
Email ThisBlogThis!Share to TwitterShare to FacebookShare to Pinterest

Riding ELDCPS's Christmas Train into the past...


Actually the train ride, sponsored by the Erie Lackawanna Dining Car Preservation Society (ELDCPS), was to Gouldsboro (PA) on December 10th. Saturday's four inches of snow and sunshine made a nice touch to what amounted to being a pleasant ride through the Poconos. The ride was described as follows " The train will stop at the historic Gouldsboro station for everyone to have the opportunity to explore the restored station. At the station, passengers will enter the Dickensian world of A Christmas Carol with volunteers dressed in period-authentic costumes, featuring stories, caroling, and a visit from Santa, Scrooge, and his ghostly visitors." Passing over the grade crossing in Tobyhanna I recalled that was the crossing I bicycled over in my NJ to Wyoming bike trip on a day that was hot and humid. The Goldsboro Area Foundation proved to be very good hosts at the station with their various home made goodies. At 3:30 it was time to depart for the trip back to East Stroudsburg. Our train was held for about twenty minutes around Mount Pocono for a northbound DL freight. Once that train passed we were once again heading for East Stroudsburg. All in all, it was a nice day on a trip that was well run.
Image 1: Passengers getting ready to board in East Stroudsburg for the 1 PM departure. Motive power for this trip was DL 2403 and DL 2423.
Image 2: The Christmas Train awaits its passengers to board in Gouldsboro for the return trip to East Stroudsburg.
Image 3: I was tempted to try an existing light photo and the Christmas Train's evening return provided me that opportunity. My location for this scene was the porch on the East Stroudsburg Tower and for a "stand" I used the tower's wooden railing. 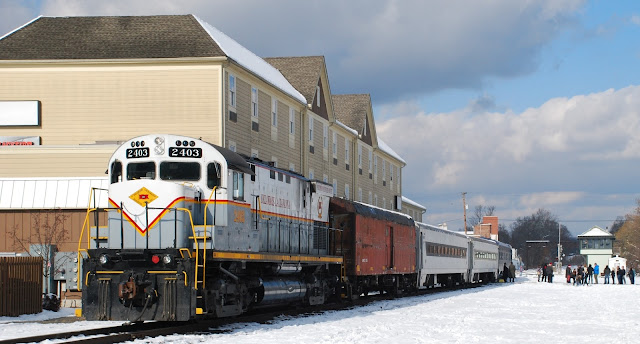 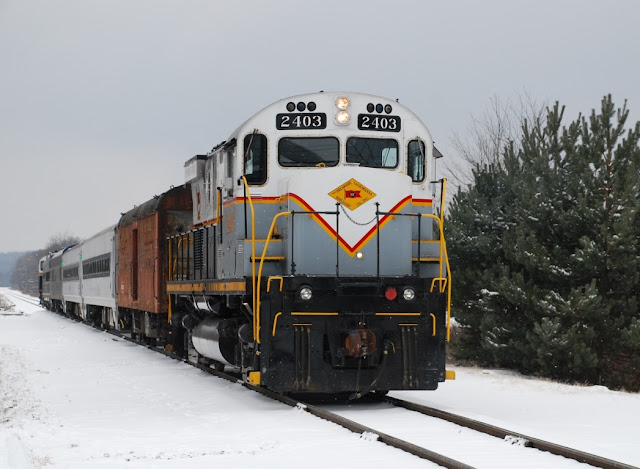 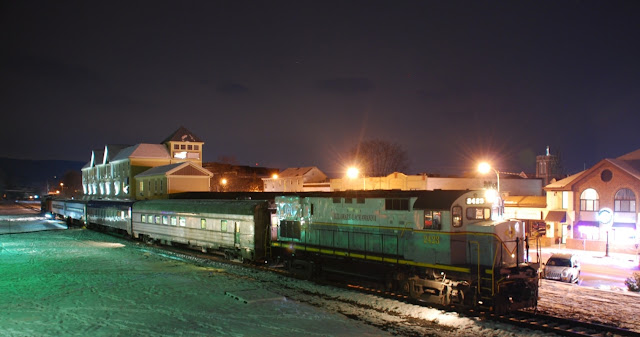 Posted by The Big Little Railroad Shop at 8:14 AM
Email ThisBlogThis!Share to TwitterShare to FacebookShare to Pinterest


Mars Wrigley Confectionery, maker of M&M’s, this week announced plans to locate its U.S. headquarters to the former Newark Warehouse Company, opened in 1907 as a rail-served facility by the Central Railroad of New Jersey in the heart of the city’s business district.

The company, with offices in Chicago and Hackettstown, N.J., will locate about 500 jobs in the structure, to be renovated as part of Ironside Newark, a 456,000-square foot commerce and retail center.


Posted by The Big Little Railroad Shop at 8:07 AM
Email ThisBlogThis!Share to TwitterShare to FacebookShare to Pinterest

Saturday marked the twenty-first year that the Lackawanna Heritage Valley National and State Heritage Area have combined their efforts to hold the annual Christmas in a Small Town celebration. Carbondale, Archbald, Jessup, Olyphant and Dickson City were the towns the "Santa Train" made scheduled stops in. Upon the train's arrival in Archbald it was interesting to see a majority of the people holding up their arm to record the train's arrival with their cell phones. It made me wonder if people standing in the back got a video of the arms of people standing in front of them? Motive power was Steamtown's #26, Baldwin Locomotive Works 0-6-0, with two Lackawanna coaches. The attached photos were taken in Archbald as the train arrived and in Olyphant as the train was departing for its next stop which was Dickson City. 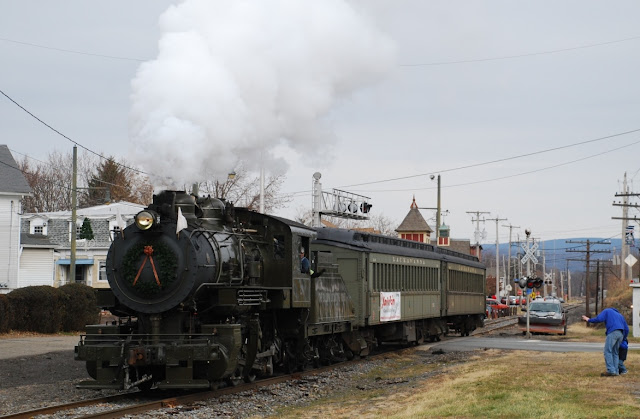 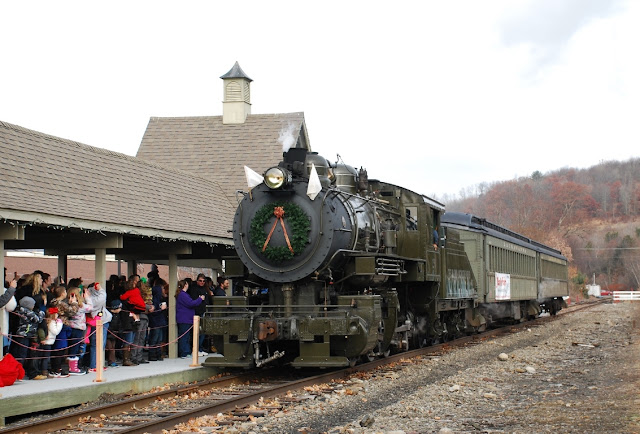 Posted by The Big Little Railroad Shop at 8:18 PM
Email ThisBlogThis!Share to TwitterShare to FacebookShare to Pinterest

Posted by The Big Little Railroad Shop at 9:37 PM
Email ThisBlogThis!Share to TwitterShare to FacebookShare to Pinterest


Back in August of 1994 I was up around Bloomsbury along CR's Lehigh Line when I heard a CR train, symbol SPL-101, coming east. My curiosity sparked by this unusual symbol I waited to see what this train was. Leading the consist was CR 7868 as seen in the first photo passing by the since removed block signal at Lehigh Line MP 68.8 in Bloomsbury (NJ). The second image shows M&E's # 18 bringing up the rear as it passes by the former Agway farm products business in Bloomsbury, now known as F.S. Growmark. SPL-101 would then take the siding at West Portal and wait on a west bound power move down around CP Pattenburg before proceeding east. 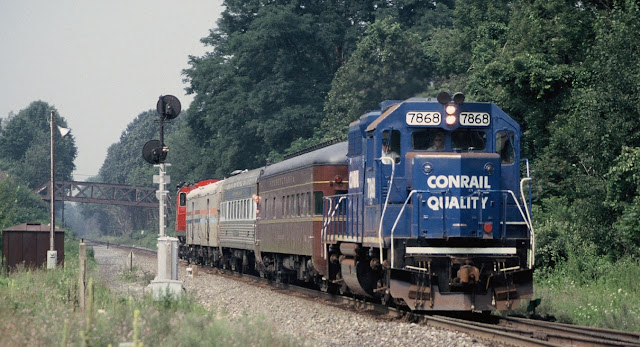 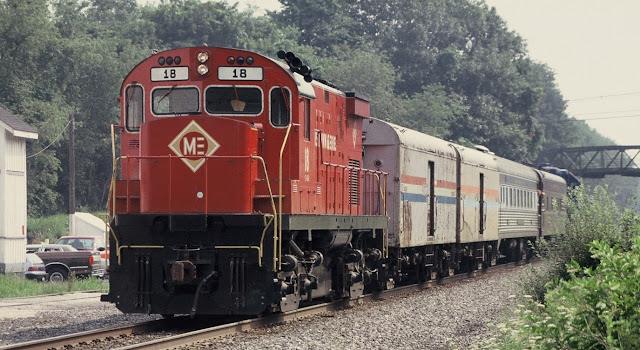 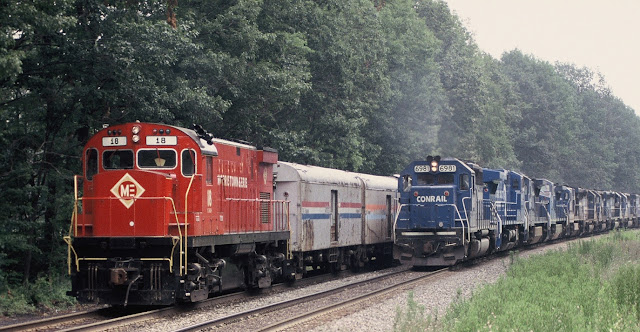