NS 24V would follow at 9:53 on to the passing siding at CP 64 and be held there for no apparent reason as there were no westbounders forthcoming. At 11:20, it would then pass through Stanton Station and be held at CP 51 for 11J, whose power was not seen, and another westbound, symbol unknown.

What was nice for me was being able to photograph the 24V in good sunlight amidst a backdrop of fall foliage at Pattenburg and Stanton Station. Not able to include those scenes here as they were shot on film as I wanted to capture some of fall's fading color on film... 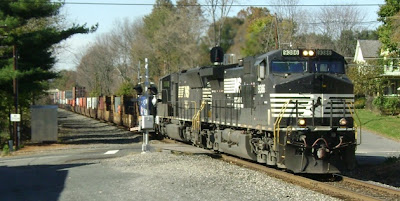