with the weather forecast calling for still more gray skies for Monday and Tuesday, I decided that Sunday afforded me to some trackside time. As it turned out, the trains were about as frequent as a sunny day in central Jersey! Only two trains would pass by my location.

A few minutes later, CSX Q300 would finish working Manville yard and head east to Oak Island around 9:34. Motive power would be two ES44DCs-CSX 5453 and CSX 5271. At the tail end of this train was a number of EPIC garbage containers. A roster shot has been included for modeling purposes. After all, hauling garbage is now becoming a revenue commodity for NS and CSX.

With no trains on the horizion, it was time for me to call it a morning and read Sunday's newspapers. Have a good day along with a happy and healthy new year! See you next year... 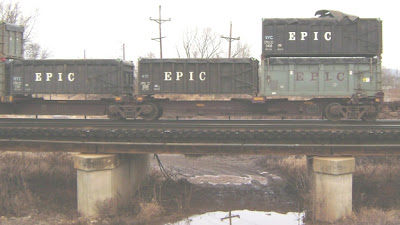